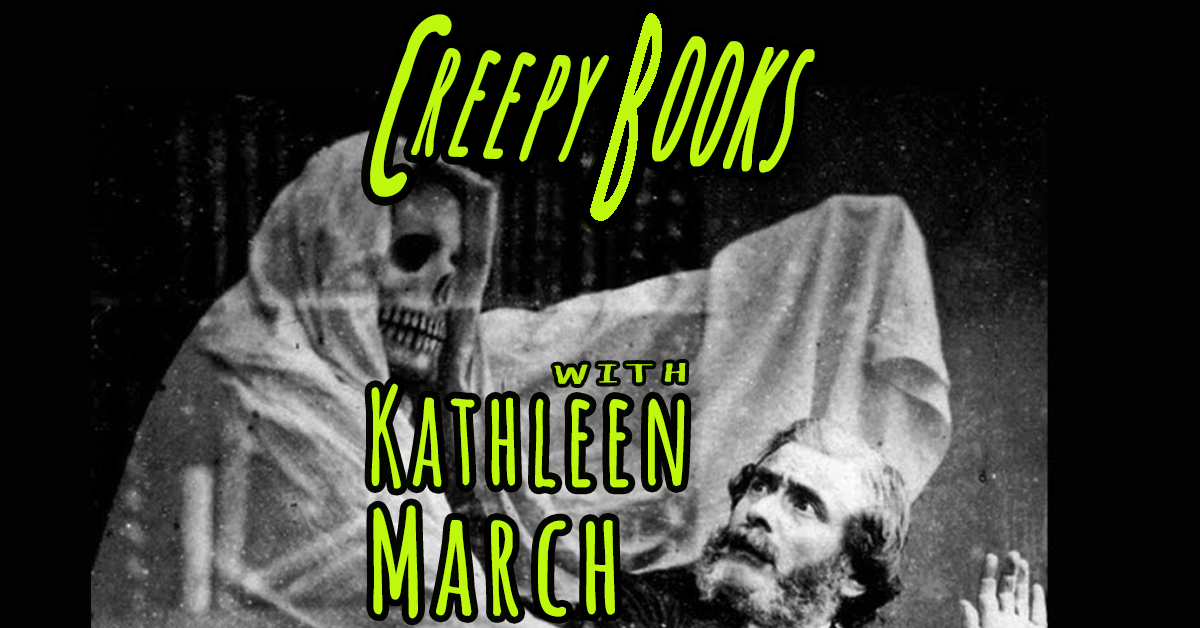 Samhain, Halloween, and the Day of the Dead are upon us again. Time for Pumpkin Ale, Petite Syrah, and books that chill your spine with our very special guest, Kathleen March! Slàinte and Salud!

NB: There were a pair of high-quality tangents that, while good material, didn’t quite fit the show parameters. The first discussed non-binary characters; the second focused first-time authors. These have been broken out into their own bits of audio and placed in the notes below.

Kathleen March is the Children’s Manager at the Downers Grove Anderson’s Bookshop. She’s been with Anderson’s for 21 years and supports readers from birth and beyond.
Along with being the Children’s Manager, Kathleen plans and host store events; conducts community outreach; and works with schools and school districts to help ensure they have the newest books for their curriculum.
Her knowledge, abilities, and good humor are legendary to the point that Kathleen is frequently referred to as a ‘Book Goddess.’

“[A] monstrously funny, deliciously disgusting, horrifyingly hilarious story of a monster who follows his dream. Keith Graves’ wacky illustrations and laugh-out-loud text will tickle the funny bone and leave readers clamoring for an encore.”

“Claire has absolutely no interest in the paranormal. She’s a scientist, which is why she can’t think of anything worse than having to help out her dad on one of his ghost-themed Chicago bus tours. She thinks she’s made it through when she sees a boy with a sad face and dark eyes at the back of the bus. There’s something off about his presence, especially because when she checks at the end of the tour…he’s gone.”

“New York Times bestselling adult author of The Bear and the Nightingale makes her middle grade debut with a creepy, spellbinding ghost story destined to become a classic. “

“A genre-defying novel from the award-winning author NPR describes as ‘like [Madeline] L’Engle…glorious.’ A singular book that explores themes of identity and justice. Pet is here to hunt a monster. Are you brave enough to look?”

While discussing Pet, the conversation veered into how authors signify non-binary characters to their readers; pronoun usage; clarity in narrative; and the responsibilities of authors, editors, and readers when meeting in this space.

“After receiving a frantic letter from her newly-wed cousin begging for someone to save her from a mysterious doom, Noemí Taboada heads to High Place, a distant house in the Mexican countryside. She’s not sure what she will find—her cousin’s husband, a handsome Englishman, is a stranger, and Noemí knows little about the region. . . .

“But she’s also tough and smart, with an indomitable will, and she is not afraid: Not of her cousin’s new husband, who is both menacing and alluring; not of his father, the ancient patriarch who seems to be fascinated by Noemí; and not even of the house itself, which begins to invade Noemi’s dreams with visions of blood and doom.”

“A family returns to their hometown—and to the dark past that haunts them still—in this masterpiece of literary horror by the New York Times bestselling author of Wanderers.”

At one point, Kathleen mentioned debut authors, which naturally took us into a two-minute sidebar for one of her favorite books. It didn’t fit with the overall theme, but her endorsement was strong enough to mention it here.

Founded in 1996 and named in honor of the origins of Chicago’s name, Wild Onion was one of Chicago’s first craft breweries.

“‘Che-cau-gua’ was the phrase the original inhabitants of the region, the Potawatomi, used to describe the wild onions that grew throughout the area’s wetlands near the shores of Lake Michigan.”

Wild Onion’s classic Pumpkin Ale is made from pumpkins, yams, and baking spices and is available on tap at their locations in Lake Barrington and Oak Park, or in 16 oz cans at fine liquor stores throughout the Chicagoland area.

“Buckle up for a Petite Sirah that’s equally elegant and powerful. This seductive stunner brings together bodacious flavors of bursting blackberries, orange peel, anise, and a delightfully subtle hint of cacao and baking spices. With structured tannins and a big mouthfeel, this is one you won’t soon forget!” (Producer’s website)


What is the difference between Petite Syrah and Syrah? at Wine Spectator

Anderson’s Bookshops are a pair of bookstores in Chicago’s western suburbs. The six generation, family-owned and family-run shops are cornerstones in the communities of Naperville and Downers Grove, Illinois, and are from where I order a good number of my books for this show.
In September 2021, the Downers Grove location celebrated 41 years of serving readers of all ages with everything from books, to toys, to author events both large and small.

“The Newbery Medal was named for eighteenth-century British bookseller John Newbery. It is awarded annually by the Association for Library Service to Children, a division of the American Library Association, to the author of the most distinguished contribution to American literature for children.” (citation)

Register for the November 5, 2021 —University of Illinois Center for Children’s Books Newbery Medal at 100 celebration (virtual)

Vacu-Vin Wine Saver — “The one and only, original Vacu-Vin, used in more than 10 million homes worldwide, is the easiest, most affordable way to preserve opened wines.”

Can you refrigerate red wine? at Wine Spectator

Fact or Fiction: Does a Spoon in the Bottle Keep Champagne Bubbly? at Scientific American
(HINT: It’s fiction.)

The Champagne stopper I recommend is available at Crate & Barrel. While I happen to own one, it’s used only on the ultra-rare occasion that a bottle fails to be emptied.

“The Toccata and Fugue in D minor . . . is a piece of organ music written, according to its oldest extant sources, by Johann Sebastian Bach. . . .
“Despite a profusion of educated guesswork, there is not much that can be said with certainty about the first century of the composition’s existence other than that it survived that period in a manuscript written by Johannes Ringk. The first publication of the piece, in the Bach Revival era, was in 1833. . . .
“In the last quarter of the 20th century, scholars such as Peter Williams and Rolf-Dietrich Claus published their studies on the piece and argued against its authenticity. Bach scholars like Christoph Wolff defended the attribution to Bach. Other commentators ignored the doubts over its authenticity, or considered the attribution issue undecided.” (Wikipedia)