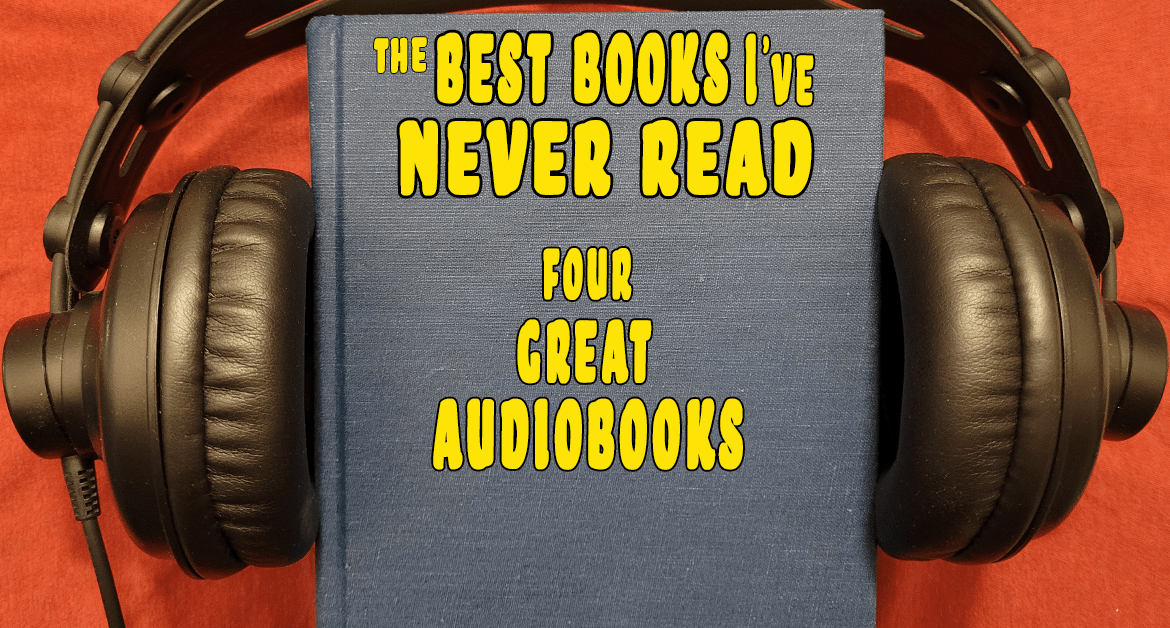 Making the very tasty gin-based Bramble cocktail while talking about the magic of audiobooks. A salud!

The novel opens in the aftermath of an inexplicable tragedy—a tiny footbridge in Peru breaks, and five travelers hurtle to their deaths. Most townspeople think to themselves with secret joy, “Within 10 minutes myself….”

But for Brother Juniper, a humble Franciscan friar who witnesses the catastrophe, the question is inescapable: Why those five? Suddenly, Brother Juniper is committed to discover what manner of lives these five disparate people led—and whether it was divine intervention that took their lives, or a capricious fate. (High Bridge Audio)

Tyrannical Nurse Ratched rules her ward in an Oregon State mental hospital with a strict and unbending routine, unopposed by her patients, who remain cowed by mind-numbing medication an the thread of electric shock therapy.

But her regime is disrupted by the arrival of McMurphy — the swaggering, fun-loving trickster with a devilish grin who resolves to oppose her rules on behalf of his fellow inmates.

His struggle is seen through the eyes of Chief Bromden, a seemingly mute half-Indian patient who understands McMurphy’s heroic attempt to do battle with the powers that keep them imprisoned. Ken Kesey’s extraordinary first novel is an exuberant ribald and devastatingly honest portrayal of the boundaries between sanity and madness. (Recorded Books)

On the eve of his marriage to the beautiful Mercedes, having that very day been made Captain of his ship, the young sailor Edmond Dantes is arrested on a charge of treason, trumped up by jealous rivals. Incarcerated for many lonely years in the isolated and terrifying Chateau d’If near Marseille, he meticulously plans his brilliant escape and extraordinary revenge. Of all the ‘Masked Avengers’ and ‘Caped Crusaders’ in literature, the Count of Monte Cristo is at once the most daring and the most vulnerable. Alexandre Dumas, master storyteller, takes us on a journey of adventure, romance, intrigue, and, ultimately, redemption. (Recorded Books)

Haunted by Chuck Palahniuk is a novel made up of stories: Twenty-three of . . . the most horrifying, hilarious, mind-blowing, stomach-churning tales you’ll ever encounter—sometimes all at once . . . . It draws from a great literary tradition—The Canterbury Tales, The Decameron, the English storytellers in the Villa Diodati who produced, among other works, Frankenstein—to tell an utterly contemporary tale of people desperate that their story be told at any cost. Appallingly entertaining, Haunted is Chuck Palahniuk at his finest—which means his most extreme and his most provocative. (Random House Audio)

The Bramble Cocktail Written by Colleen Graham at TheSpruceEats.com

“The bramble is a modern classic and a simple gin cocktail with a fruity flair. The story goes that it was created in 1984 by U.K. bartender Dick Bradsell and it has been enjoyed by many drinkers ever since.”

Into a cocktail shaker about half-full of ice, goes:
1 1/2 oz ounces of gin
3/4  oz of simple syrup
3/4 oz freshly squeezed lime juice
Shake vigorously for at least 15 seconds. (For all the details why, go listen to Episode 007 ⎯⎯ The Real James Bond)
– Strain the cocktail into a highball glass 3/4ths full of crushed ice
– Drizzle the crème de mûre over the top of the drink
– Slide some raspberries or blackberries (or both) on a bamboo skewer
– Pop the lime wheel on the rim
– Enjoy!

Inventing Entertainment: The Early Motion Pictures and Sound Recordings of the Edison Companies

The History of AudioBooks Guide

A Short History of the Audiobook: 20 Years After the First Portable Digital Audio Device

Audiobooks Continue Their Market Rise with 16% Growth In Sales

Audiobook outlets (other than Amazon)

Libro.fm ⎯⎯ Libro.fm makes it possible for you to buy audiobooks through your local bookstore, giving you the power to keep money within your local economy, create local jobs, and make a difference in your community. Whether you are paying for monthly membership, giving an audiobook gift to a friend, or buying audiobooks for your organization, Libro.fm splits the profit from your purchases with your local bookstore.

Hoopla Digital  ⎯⎯ A groundbreaking digital media service offered by your local public library that allows you to borrow movies, music, audiobooks, ebooks, comics and TV shows to enjoy on your computer, tablet, or phone – and even your TV! Titles can be streamed immediately, or downloaded to phones or tablets for offline enjoyment later. Hoopla has hundreds of thousands of titles to choose from, with more being added daily. Hoopla is like having your public library at your fingertips. Anytime. Anywhere.

Overdrive ⎯⎯ Borrow and read free ebooks, audiobooks, and magazines from your library using your phone or tablet. It’s easy to get started―all you need is a library card!