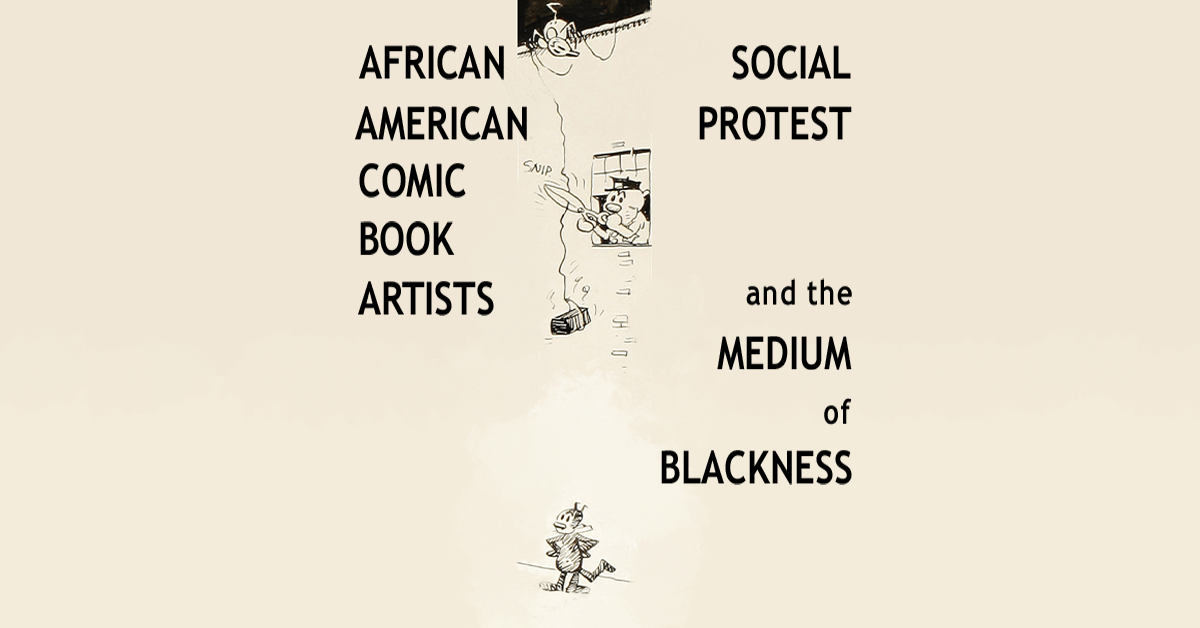 Wrapping up African–American History Month by looking at five books on the contributions to comics and sequential art narrative by Black creators, as well as the growing scholarship around the topic, while sipping another custom cocktail made with Chicago’s own PlayPen Vodka. Cheers!

An epic and revelatory biography of Krazy Kat creator George Herriman that explores the turbulent time and place from which he emerged–and the deep secret he explored through his art. . . .
Drawing on exhaustive original research into Herriman’s family history, interviews with surviving friends and family, and deep analysis of the artist’s work and surviving written records, Michael Tisserand brings this little-understood figure to vivid life, paying homage to a visionary artist who helped shape modern culture. (Publisher description)

EC Comics: Race, Shock, and Social Protest examines a selection of these works – sensationally-titled comics such as “Hate!,” “The Guilty!,” and “Judgment Day!” – and explores how they grappled with civil rights struggle, antisemitism, and other forms of prejudice in America. Putting these socially aware stories into conversation with EC’s better-known horror stories, Qiana Whitted discovers surprising similarities between their narrative, aesthetic, and marketing strategies. She also recounts the controversy that these stories inspired and the central role they played in congressional hearings about offensive content in comics. (Author website)

As the first detailed investigation of Black women’s participation in comic art, Black Women in Sequence examines the representation, production, and transnational circulation of women of African descent in the sequential art world. In this groundbreaking study . . . Deborah Whaley suggests that the treatment of the Black female subject in sequential art says much about the place of people of African descent in national ideology in the United States and abroad. (Publisher description)

The Blacker the Ink is the first book to explore not only the diverse range of black characters in comics, but also the multitude of ways that black artists, writers, and publishers have made a mark on the industry.

Named for the pioneering comics creator and graphic novelist Will Eisner, the Will Eisner Comic Industry Awards are considered the “Oscars” of the comics world. The 2016 awards were presented on Friday in more than two dozen categories during a gala ceremony at Comic-Con International: San Diego. (Publisher description)

Exclusive to OB&B listeners — a new cocktail!
No name for it yet, but suggestions are welcome. Send them along via our Contact page.

Combine the vodka, Chartreuse, and pineapple juice into a cocktail shaker 1/3rd to 1/2 full of ice cubes; stir with cocktail spoon for 30 seconds

Strain the liquid into the glass while avoiding the salted rim

Slide alternating Luxardo Maraschino Cherries and grilled pineapple onto the skewer; place in the glass; swirl the skewered fruit twice around

At a time of increased interest and renewed shock over the Tuskegee syphilis experiments, Acres of Skin sheds light on yet another dark episode of American medical history. In this disturbing expose, Allen M. Hornblum tells the story of Philadelphia’s Holmesburg Prison. (Publisher description)

Medical Apartheid: The Dark History of Medical Experimentation on Black Americans from Colonial Times to the Present by Harriet A. Washington

National Book Critics Circle Award Winner — The product of years of prodigious research into medical journals and experimental reports long undisturbed, Medical Apartheid reveals the hidden underbelly of scientific research and makes possible, for the first time, an understanding of the roots of the African American health deficit. At last, it provides the fullest possible context for comprehending the behavioral fallout that has caused Black Americans to view researchers–and indeed the whole medical establishment–with such deep distrust. (Publisher description)

Jackie Ormes chronicles the life of this multiply talented, fascinating woman who became a successful commercial artist and cartoonist. Ormes’s cartoon characters (including Torchy Brown, Candy, and Patty-Jo ‘n’ Ginger) delighted readers of newspapers such as the Pittsburgh Courier and Chicago Defender, and spawned other products, including fashionable paper dolls in the Sunday papers and a black doll with her own extensive and stylish wardrobe. . . . The book includes a generous selection of Ormes’s cartoons and comic strips, which provide an invaluable glimpse into U.S. culture and history of the 1937-56 era as interpreted by Ormes. Her topics include racial segregation, cold war politics, educational equality, the atom bomb, and environmental pollution, among other pressing issues of the times. (Publisher description)

Luke Cage burst onto the comics scene in 1972 as the Hero for Hire. Equal parts Marvel Method and Blaxploitation boldness, he was . . . the historic first African-American character to headline his own series. . . . This Epic Collection present page after page of classic Luke Cage adventures. (Publisher description)

Additional info on Luke Cage at Marvel.com and Marvel.Fandom.Com

5 Luke Cage Costumes That We Love (& 5 That We Don’t) at ComicBookResources.com

Jimmy Corrigan: The Smartest Kid on Earth
by Chris Ware

This first book from Chicago author Chris Ware is a pleasantly-decorated view at a lonely and emotionally-impaired everyman . . . who is provided, at age 36, the opportunity to meet his father for the first time. An improvisatory romance which gingerly deports itself between 1890’s Chicago and 1980’s small town Michigan, the reader is helped along by thousands of colored illustrations and diagrams, which, when read rapidly in sequence, provide a convincing illusion of life and movement. The bulk of the work is supported by fold-out instructions, an index, paper cut-outs, and a brief apology, all of which concrete to form a rich portrait of a man stunted by a paralyzing fear of being disliked. (Publisher description)

10 Black-Owned Distilleries Making Some of America’s Finest Bottles at WineMag.com

What was the source of Krazy Kat’s comic genius? By Glen David Gold at The Washington Post

The Complicated History of the Black Superhero at TheWeek.com

Info on Lobo in Dell Comics (1965) and some disputes over his creation at HeyKidsComics.Fandom.com

Details on The Butterfly (1971) including her two full stories at MuseumOfUncutFunk.com

Watch on Vimeo or Kanopy

White Scripts and Black Supermen examines the degree to which early Black superheroes generally adhered to common stereotypes about Black men. From the humorous, to the offensive, early Black superheroes are critically considered.is a critically-acclaimed documentary film that is the first to examine the representation of Black masculinity in comic books. It is the recipient of the 2012 Peter Rollins Best Documentary Film Award from the Popular Culture Association/American Culture Association in addition to a number of other awards. It has screened nationally and internationally at hundreds of film festivals, academic conferences and a variety of invited screenings. (Producer description)

Visit SiteByMike.com to see what they can do for you!