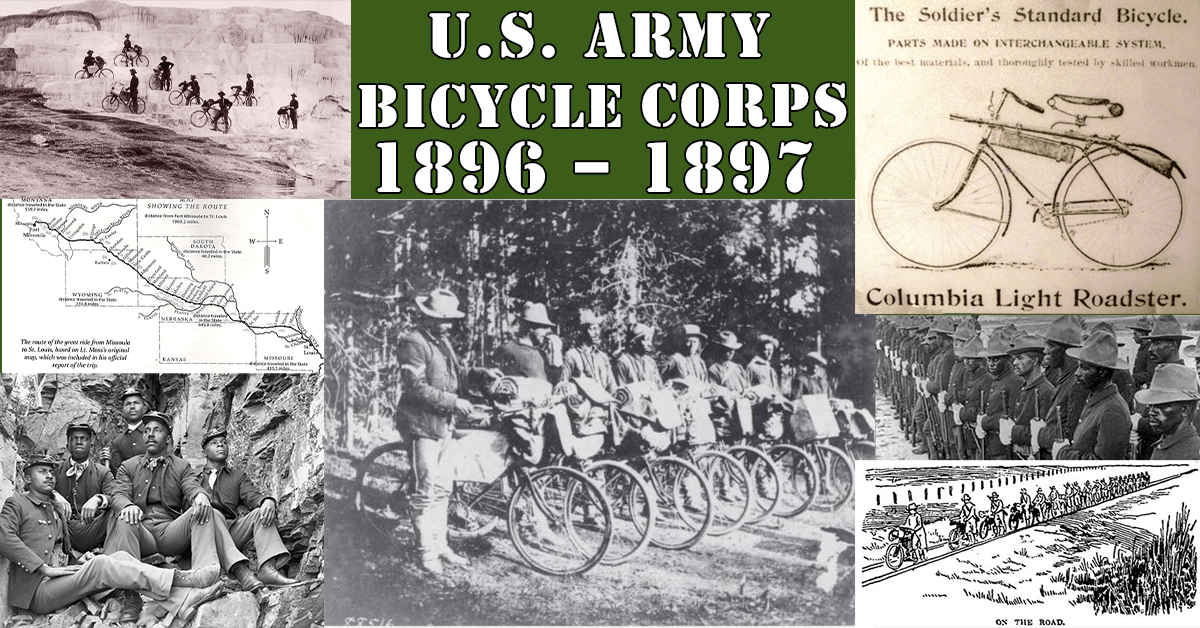 Celebrating Black History Month with a look at the U.S. Bicycle Corps of 1896 and 1897 while sipping Moor’s Session Ale — a crisp IPA produced by Chicago’s Black-Owned beer company, the Moor’s Brewing Company. Cheers!

“In 1896 Lt. James Moss, second lieutenant at Fort Missoula, Montana, had a revolutionary idea: that bicycles . . . could be employed by the military to replace cavalry horses for certain operations. . . . [He] set out to test this idea and prove the worth of the bicycle in army campaigns. Stationed at Fort Missoula at the time was the 25th Infantry, and all-black regiment. From these African–American troops, Lt. Moss chose an elite group to form the Bicycle Corps and attempt a historic 2,000-mile journey to St. Louis. In the The Great Bicycle Experiment, Kay Moore chronicles this challenging journey, highlighting the hardships and triumphs of these stalwart soldiers as they pedaled and pushed their way across the mountains and plains into history.” (Publisher summary)

Fugitive Pedagogy: Carter G. Woodson and the Art of Black Teaching
Author: Jarvis R. Givens
Publisher: Harvard University Press (2021)
“Fugitive Pedagogy chronicles Woodson’s efforts to fight against the “mis-education of the Negro” by helping teachers and students to see themselves and their mission as set apart from an anti-Black world. Teachers, students, families, and communities worked together, using Woodson’s materials and methods as they fought for power in schools and continued the work of fugitive pedagogy. Forged in slavery, embodied by Woodson, this tradition of escape remains essential for teachers and students today.” (Publisher summary)

“In 711 A.D. , Tariq ibn Ziyad led Moors of Berber decent across the strait of Gibraltar between Africa and Europe – conquering Spain for the next 700 years. They introduced new scientific techniques to the European culture, including a distillation and fermentation process that produced what they called al-kuhl. This beer pays homage to the rich untold history of our African ancestry and the “original craftsmen” that made it happen.

Chicago’s Black-owned breweries unite for 6-week residency in the West Loop, including collaboration beer: ‘It reminds me of a revolutionary time’

“In celebration of Black History Month (and slightly beyond), the veteran West Loop brewpub [Haymarket Pub & Brewery] will host a residency starting Tuesday and running through March 13 for four of the state’s few breweries with at least partial Black ownership.”

Origins of Black History Month at the Association for the Study of African American Life and History
“The story of Black History Month begins in Chicago during the summer of 1915. An alumnus of the University of Chicago with many friends in the city, Carter G. Woodson traveled from Washington, D.C. to participate in a national celebration of the fiftieth anniversary of emancipation sponsored by the state of Illinois. Thousands of African Americans travelled from across the country to see exhibits highlighting the progress their people had made since the destruction of slavery. Awarded a doctorate in Harvard three years earlier, Woodson joined the other exhibitors with a black history display. Despite being held at the Coliseum, the site of the 1912 Republican convention, an overflow crowd of six to twelve thousand waited outside for their turn to view the exhibits. Inspired by the three-week celebration, Woodson decided to form an organization to promote the scientific study of black life and history before leaving town”

Bicycle Corps: America’s Black Army on Wheels — Aired 12/19/1999 (00:56:46)
“This program tells the story of the 25th Infantry’s bicycle trip from Missoula, Montana, to St. Louis, Missouri in 1897. The African American infantry took the trip to test a theory that the bicycle would replace the horse in transporting men for the army. The program also examines the life of the African American soldier at the turn of the century, in particular First Sergeant Mingo Sanders.”

The 1897 Spalding 25th Infantry Military ‘Special’ at OnlineBicycleMuseum.co.uk
Lots of good info and tons of great pix. Probably the most comprehensive examination on the Web. Check it out!

BlackPast.org‘s January 30, 2015 summary of Sgt. Sanders’s military service and dishonorable discharge in 1906. Information on the “Brownsville Affray,” but no information on his role in the U.S. Bicycle Corps.

New Thoughts About Mingo Sanders at FollowingThe Lieutenant.blogspot.com
More great detail on the 25th Infantry Bicycle Corps including newspaper articles from the period and even an article from a February 1996 issue of Highlights for Children!

History of the Bicycle

A great infographic of The History & Evolution of the Bicycle at evelo.com

Weizen Glass — Originating in Germany, the Weizen Glass is tall and strong, with a narrow waist and a curved lip for maintaining a strong head. While the size and shape resembles a Pilsner glass, Weisen glasses have more curvature at the top and are typically used for serving wheat beer.

What is Session Beer? — What Makes Beer “Sessionable”?