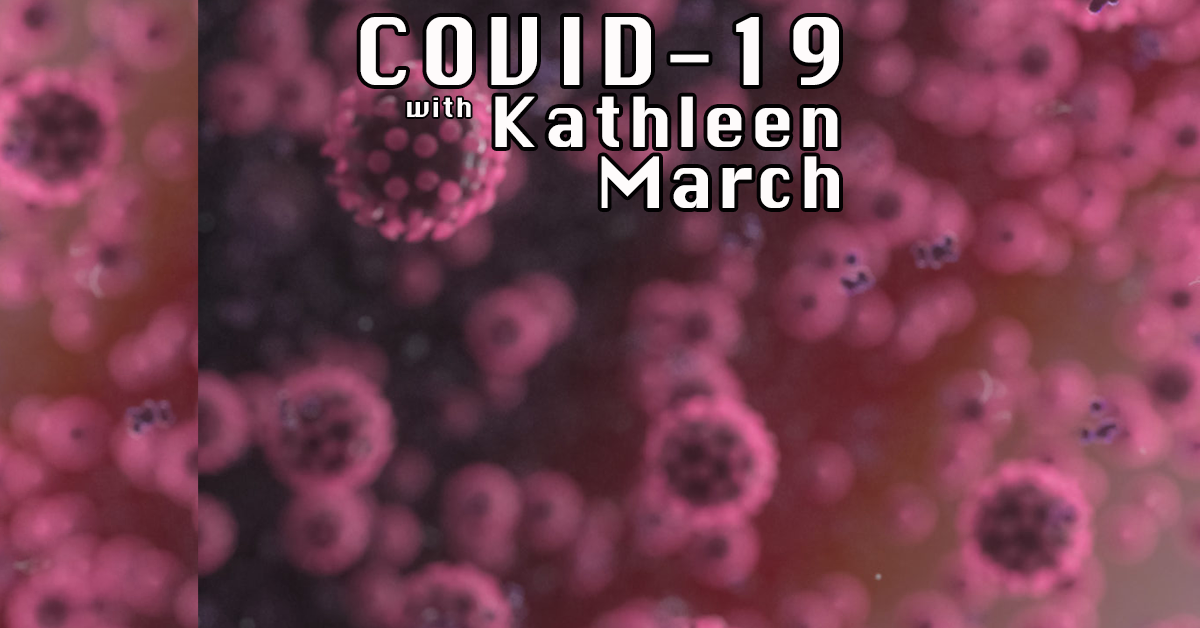 Two shots and a booster: The prescription for fighting COVID-19 and getting through this episode.

The Book Goddess, Kathleen March, discusses titles that helped her battle the Delta variant while we both take our medicine — 1.75 ounces at a time. Toss ’em back and mask up!

Come Fly The World
Author: Julia Cooke
Publisher: Mariner Books (2021)
“Glamour, danger, liberation: in a Mad Men–era of commercial flight, Pan Am World Airways attracted the kind of young woman who wanted out, and wanted up.

“Required to have a college education, speak two languages, and possess the political savvy of a Foreign Service officer, a jet-age stewardess serving on iconic Pan Am between 1966 and 1975 also had to be between 5′3″ and 5′9″, between 105 and 140 pounds, and under 26 years of age at the time of hire. Cooke’s intimate storytelling weaves together the real-life stories of a memorable cast of characters, and brings to light the story of Pan Am stewardesses’ role in the Vietnam War. ” (Publisher description)

“Yuta became immortal when he unwittingly ate mermaid flesh, and now he seeks a way to become human again. Hundreds of years later, he encounters a volatile and determined young lady named Mana while searching for a mermaid. Could this mysterious woman hold the key to saving Yuta’s humanity?” (Publisher description)

“Amos Abernathy lives for history. Literally. He’s been a historical reenactor nearly all his life. But when a cute new volunteer arrives at his Living History Park, Amos finds himself wondering if there’s something missing from history: someone like the two of them.

“Amos is sure there must have been LGBTQ+ people in nineteenth-century Illinois. His search turns up Albert D. J. Cashier, a Civil War soldier who might have identified as a trans man if he’d lived today. Soon Amos starts confiding in his newfound friend by writing letters in his journal—and hatches a plan to share Albert’s story with his divided twenty-first century town. It may be an uphill battle, but it’s one that Amos is ready to fight.” (Publisher description)

Jägermeister
Macerated and refined to perfection in one of the 445 German Oak barrels in their factory celler, Jägermeister is a blend of 56 botanicals, the recipe for which is a closely guarded secret (except Wikipedia lists some of them as “fruits, roots, and spices, including citrus peel, licorice, anise, poppy seeds, saffron, ginger, juniper berries, and ginseng). Per the company, “This is a proper shot” and is to be served at -18° C/-0.4° F.

Even with a slightly lower 35% ABV than other shot-typical booze, I put Jägermeister in the same category as Jeppson’s Mälort — a dare drink that has a taste difficult to enjoy, but primes the system for a night of heavy drinking.

Also, it’s telling that the recommended serving temperature is . -18° C/-0.4° F. That far below freezing, any of the botanicals’ combined flavors will be severely muffled. Maybe that’s the point.

Derived from three types of grain and triple distilled, then and the blend of all three Irish whiskeys Tullamore D.E.W. is the original triple-blend Irish whiskey known the world over for its smooth and gentle complexity.

Fun Fact: D.E.W. are the initials of a general manager and, later, owner of the Tullamore Distillery, Daniel E. Williams.

Door County Distillery Cherry Bluff Infusion
“Our own twist on Bitters! A unique blend of cherries, citrus, and herbs provides a natural way to enhance your mixed drinks or sparkling water. Add a dash of flavor to an Old Fashioned – no muddling needed! Pour spout built into the cap.”

Recipes to try with the Cherry Bluff Infusion

Why do people do shots? at TheTakeout.com
“Shots in days of yore made sense—as an idiot college sophomore partying with my friends, my drink of choice was four tequila shots evenly spaced throughout the evening. But as a straight-up grownup, I only see these “adult” shots (no matter the price point) as expensive and toxic—a bad combination. Tell me what I’m missing, fellow Takeout staff members and wise commenters: Why shots?”

The Jägermeister site claims it originated in 1878. This is true, as far as it relates to when Wilhelm Mast founded his vinegar factory in Wolfenbüttel, Germany, but not the liqueur or the brand. For more info, see the Wikipedia page.

Deer blood?
Apparently, there was an urban myth that among Jägermeister’s secret ingredients was deer blood. Some people want to believe anything.

“Rumiko Takahashi is one of the most important female mangaka in Japan and nicknamed “The Princess of Manga”. She earned her reputation by creating romantic comedy stories which all became incredible bestsellers.” (Lambiek Comiclopedia)

For more info on Rumiko Takahashi, her books, etc., visit Rumic World, the English-language fansite of her work.