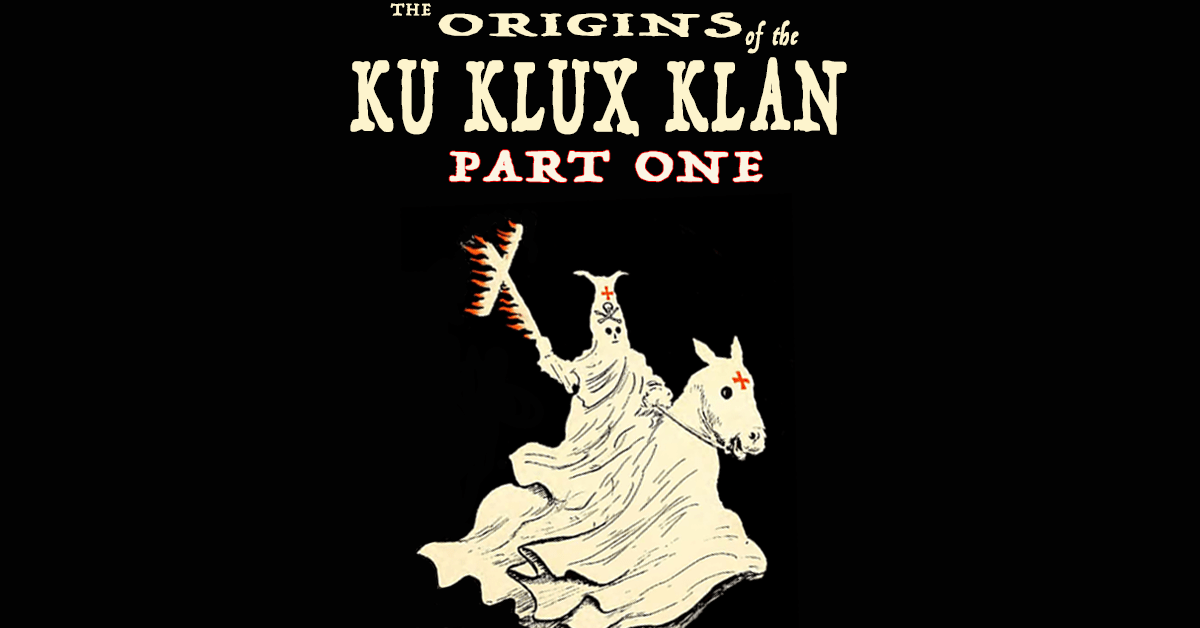 Part One of Two. This time we’re drinking Yellow Belly Imperial Stout while taking an intensive look at the founding of the United State’s longest-running terrorist organization, the Ku Klux Klan. Along the way, we’ll try to sift fact from fiction about the group’s early days, examine factors leading to the Klan’s formation, and pin down the bedrock cause of the American Civil War. (It’s not what you think it is!)

They Called Themselves the K.K.K: The Birth of an American Terrorist Group

“Filled with chilling and vivid personal accounts unearthed from oral histories, congressional documents, and diaries, this account from Newbery Honor-winning author Susan Campbell Bartoletti is a book to read and remember. A YALSA Award for Excellence in Nonfiction for Young Adults Finalist.”

“The purpose of the ‘Authentic History Ku Klux Klan, 1865 – 1877.’ is in justification of the men and measures adopted which led to the redemption of the Southern States from Radical, Carpet-bag and Negro rule as was imposed by the Federal Government’s reconstruction measures upon them after the surrender of the Confederate States Army at Appomatox [sic] Court House, Virginia, 1965.

America Aflame: How the Civil War Created a Nation

“America Aflame offers a major new interpretation of the Civil War era, not painting the war as a triumph of freedom, but as America’s greatest failure: the result of a breakdown caused by the infusion of evangelical religion into the public sphere. The price of that failure was horrific, but the carnage accomplished what statesmen could not: It made the United States one nation and eliminated slavery as a divisive force in the Union. A panoramic narrative, sweeping from the 1840s to the end of Reconstruction and a vivid portrait of the ‘fiery trial’ that transformed the country we live in.”

Ku-Klux: The Birth of the Klan During Reconstruction

“Innovative and packed with fresh insight, Parsons’ book offers the definitive account of the rise of the Ku Klux Klan during Reconstruction . . . [the] first comprehensive examination of the nineteenth-century Ku Klux Klan since the 1970s, Ku-Klux pinpoints the group’s rise with startling acuity.”

Ku Klux Klan: Its Origin, Growth, and Disbandment
With Appendices Containing the Prescripts of the Ku Klux Klan, Specimen Orders and Warnings (PDF at the Internet Archive)

Publisher: The Neale Publishing Company
(1905 reprint of the 1884 edition with Introduction and notes by Walter L. Fleming)

“The time has now arrived when the history of the origin, growth and final decay of ‘The Invisible Empire’ may be given to the public. . . . For obvious reasons the names of individuals are withheld. but the reader may feel assured that this narrative is drawn from sources which are accurate and authentic.”

Reconstruction in the South, 1865 – 1877: Firsthand Accounts of the American Southland After the Civil War, by Southerners and Northerners

Publisher: The Noonday Press a division of Farrar, Straus and Giroux, (1965)

“Our celebrated collaboration with our great friends at Omnipollo. . . .  A bold and outspoken peanut butter & biscuit imperial stout, however, it is brewed without peanut butter or biscuit.”

(Supposed) Causes of the Civil War (other than white supremacy)

Lots of good info at ThoughtCo.com

According to Abraham Lincoln, what caused the Civil War? at Enotes.com

Attempts to prevent the Civil War

Abraham Lincoln’s Emancipation Plan and Real Status of the Slaves at TheGreatCoursesDaily.com

The Peace Conference of 1861 “was a meeting of 131 leading American politicians in February 1861, at the Willard’s Hotel in Washington, D.C., on the eve of the American Civil War. The purpose of the conference was to avoid, if possible, the secession of the eight slave states, from the upper and border South, that had not done so as of that date. The seven states that had already seceded did not attend.” (Wikipedia)

The Crittenden Compromise — part of The Peace Conference of 1861, Kentucky Senator John J. Crittenden floated several ideas, among them were six constitutional amendments that “guaranteed the permanent existence of slavery in the slave states and addressed Southern demands in regard to fugitive slaves and slavery in the District of Columbia. It proposed re-instating the Missouri Compromise (which had been functionally repealed in 1854 by the Kansas–Nebraska Act, and struck down entirely in 1857 by the Dred Scott decision), and extending the compromise line to the west, with slavery prohibited north of the 36° 30′ parallel and guaranteed south of it. The compromise included a clause that it could not be repealed or amended.” (Wikipedia)

The Confederate States of America

Article at ConstitutionStudy.com looking at whether or not the southern states had the right to secede from the Union — “There is no language in the Constitution about secession, no standards for when a state may secede, and no process for one to do so. Yet states are sovereign entities. Since they joined the union voluntarily, should they not be able to exit the union as well?”

Slavery in the Confederate Constitution –– A 2015 article published by The Abbeville Institute, the Southern Apologist website that explores “What is true and valuable in the Southern Tradition.” This article, like most of what the Abbeville institute turns out, is a candy-coated version of cherry-picked facts that never fails to overlook the reality of one group of people owning another.

“From our Black and White birthing together in the 17th century, there was reciprocal and integrated activity, mutual reliance and a daily exchange of life’s needs. Despite slavery, through working the soil and seasons together, White and Black Americans learned to respect each other’s humanity from experiencing one another within the human grind to survive and prosper. Southerners held more than we accept today a true personal intimacy and affection of community founded in the fact that they were historically twined together and bound to the land.”

The Abbeville Institute’s review of America Aflame –– “This is a work that compels the reader to look northward for the causes of the American Civil War and to Washington, D.C. for its ramifications.”